What people don't tell you about having a baby 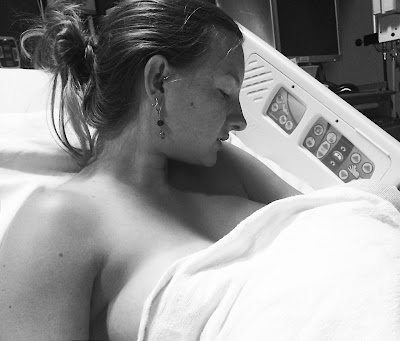 Just about every blogger that I've read who has had a baby does that one post about "what people don't tell you about giving birth and having a baby". Well...here is my version. (Obviously, I'm sure this is different for everyone though.)

You won't use anything in your hospital bag
I packed a great, yet simple hospital bag and STILL didn't use anything in it. I packed snacks, my computer, some cute/comfy outfits (and a robe) for after giving birth, my toiletries, some pads and diapers, and a few outfits and bows for the baby. Then, I didn't even open my bag. When I got to the hospital I wore their gown, ate their snacks, and was in too much pain for any kind of entertainment. After giving birth, they provided me with disposable underwear (awesome!) and pads along with with ice-packs that I could put in the pad (super awesome), and a clean hospital gown. They clothed and wrapped the baby and gave her a hat. The only time I used anything from my bag was when I took a shower the second day in the hospital. I used my toiletries and some sweatpants and tshirt. Then, when we left the hospital we put the baby into a onsie that I had packed. That was all I used, there was no point in bringing anything else.

Breastfeeding may NOT come naturally
No one told me that breastfeeding doesn't happen naturally and that it is in fact hard work. Yeah, I was told about getting a proper latch and the possibility of pain and discomfort the first few weeks, but nothing about hard work. After I delivered and the baby was on my chest I figured she would latch immediately and our mother-daughter breastfeeding bond would be set for life. Boy was I wrong! She did not latch after birth, nor did she latch an hour after birth, or even later that evening, or the next day! Turns out, some babies don't know what to do. It also turns out that I have flat nipples. (Who knew?!) Since giving birth, I have been fighting an uphill battle to naturally nurse my baby. It has been some of the hardest, most stressful, non-bonding or magical work I have ever done.

Peeing yourself is common
The day I came home from the hospital something weird happened. I had been sitting on the couch for about two hours when I felt the urge to pee. I got up to go to the bathroom and a whole bunch of warm liquid came out. Luckily, I was wearing a gorilla-sized pad so I didn't wet my clothes. My first thought was that I had hemorrhaged blood. My 10 second walk (waddle) to the bathroom was pretty horrifying as I envisioned my pants FULL of blood. When I looked though, it was clear liquid that had come out. I had, in fact, peed myself! This same thing happened about 2 other times in that first week home from the hospital.

You may not actually have to give birth to the afterbirth
After I gave birth I fully expected to push out my placenta. In fact, I prided myself on knowing this would happen. Well, it never happened. I laid in bed holding my newborn, while glancing down waiting for them to tell me to push out the placenta. About 10 minutes after my daughter had been on my chest I looked down and there was my placenta! I never pushed it out, instead, they massaged it out. How wonderful, one less thing I had to do!

Epidurals are a breeze
24 hours into my labor I had reached number 10 on the 1-10 pain scale. I couldn't take it anymore and opted for an epidural. At that point I was so spent physically, mentally, and emotionally. When the anesthesiologist came to give me the epidural I cried like a baby. I was more scared of a needle in my spine than of giving birth. I almost changed my mind I was so scared. My husband, a nurse, and the midwife held my hands and comforted me while the anesthesiologist calmly walked me through the procedure. When it was all said and done I realized that I had WAY overreacted and that getting the epidural was really painless and simple. Getting it was the best decision I could have made.

Birth = fantastic skin
Now this may just be me, but after I gave birth I had the best skin I have ever had. My complexion was soft, lustrous, and model-esque. My face was truly like a baby's bottom. I don't know why exactly this happened, but I am thinking it may have had something to do with all the fluids they were pushing through my IV with the epidural. Either way, it was a fantastic bonus side effect from giving birth. (One week later and I am back to my regular skin, boo.)

Breastfeeding makes you want to eat ALL the food
I was never very hungry during pregnancy. I kept expecting to feel an intense hunger come over me due to growing a baby, but that never happened. In fact, I probably ate less during my pregnancy than I would have normally eaten. After delivering and starting to breastfeed though, I have become ravenous! Like eat ALL the food kind of ravenous. I had no idea this kind of hunger could come over me. 2am feedings end with a trip to the fridge so I can satisfy my insatiable hunger. I eat often and I eat large. It is like a teenage boy has overtaken my body!