We got a puppy!!!
After much debate and lots of searching, Andy and I got a dog. :) He is such a sweetheart too. We named him Mr. Buckles. When we went to see him and his other brothers and sisters for the first time he chewed on my purse buckle, thus the name. He was also the most spunky out of the bunch, so we had to get him. He is a little black yorkie-poodle. Right now he is 3 1/2 lbs. but one day he should weigh a whopping 15 lbs. Yesterday he was 10 weeks old and right now we are trying to potty train him and teach him not to chew on everything. Since we live in a group house he is VERY socialized. Everyone in the house loves him, and we have friends come over just to see him. In fact, tonight we are having some good friends over who will also bring their dog, so it'll be a puppy play date. What fun! 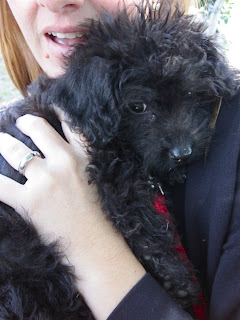 It has definitely been different to have a puppy around. He is just a little baby, so he pees and poops quite frequently and with no warning. He also sleeps a lot, but when he's up he sure does like to play and run around. He's a little speed demon running from one side of the house and then sliding to the other on the hard wood floors. What a sight he is! Since I am working from home right now (on photography) I am around to supervise him and train him. It is such a relief when Andy gets home though, to help take over the duties. I had no idea all of this work would be involved! I love the little guy, but he is a hand full. I guess things will slow down with time, but right now he is definitely a change in lifestyle. 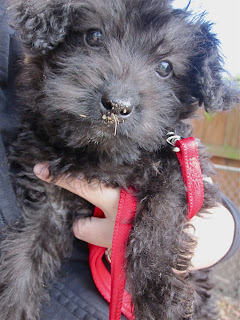