I have been trying to work on my website all day between taking the puppy out to pee and playing with him. This website building is tedious work since I really don't know what I am doing. I'm about up to my eyeballs in tutorials, bah! 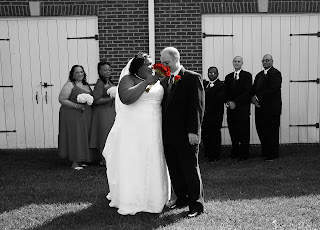 (One of many photos for my photography website. I just shot this wedding 3 weeks ago.)
Then I stumbled upon this poem and it made my day! I found it through a string of other blogs and it just flows so nicely while being so true and hilarious. :) I cut out chunks of it because it is pretty long. If you want to read all of it I'm sure you can look up the writers name and find the whole thing online somewhere.

Let's drink to '09
with a good belt of wine
(though whiskey may well be more fitting!)
The recession was hairy,
the Swine Flu was scary,
and Oprah announced she was quitting!

While we loved Lady Gaga,
the Octomom saga
struck many as shameless and wrong.
We witnessed the rift
between Kanye and Swift,
and Phelps was caught smoking a bong!

A governor's flame
was an Argentine dame,
bringing scandal to South Carolina.
There were pirate attacks,
there was Goldman Sachs,
there was poisonous drywall from China!

The Pres was sworn in
and he flashed us a grin
while exuding his usual charms.
Though some thought it shady,
the stylish First Lady
asserted her right to bare arms.

While Michelle was in Vogue,
Sarah Palin went Rogue,
and political tensions were showing.
With the gathering storm,
over health care reform,
the Tea party movement was growing.

The Hollywood crew
gave us "Transformers 2,"
while "Up" was a true work of art.
There was Bruno (a jerk!)
plus a young Captain Kirk
and an overweight mall cop named Blart.

O'Brien Shone bright
as the star of "Tonight."
Stephanopolous stepped in for Sawyer.
And of course a divorce
was so quickly in force
that we watched "Jon and Kate Plue Her Laywer!"

When a huge SUV
hit a hydrant and tree
and the juciest rumors proved true,
The endorsements went winging,
for that kind of swinging
just wasn't the Tiger we knew!

And Pop lost its King!
What a terrible thing
for an artist with hit after hit!
There were songs and orations
with loud lamentations,
for everyone knew This was It.

There were others as well
we went out, sad to tell.
We saw Cronkite and Kennedy fall.
Bea Arthur is gone,
Ed McMahon has passed on,
and Mary left Peter and Paul.

With the passing of Farrah
we ended an era
and Soupy and Swayze went too.
Deluise said goodbye,
as did Oxy-Clean Guy
and the soft-spoken star of "Kung-Fu."

Yet some news was brighter
and made us feel lighter
in spite of our sorrows and peeves.
There was Google Wave chat
and a keyboarding cat.
There were trendy new blankets with sleeves!

Though we still can't erase
all the trouble we face
from the climate to high unemployment,
Let's be of good cheer
and they won't interfere
with our holiday fun and enjoyment.

We'll turn from the news
to whatever we choose,
be it Lifetime or ESPN.
And after a break
we'll be ready to take
the big plunge into Two Thousand Ten!