Living in the ghetto

I have been soo lazy about blogging, oh my! I keep telling myself, ok I'll blog when I have put some pictures on my computer. Then I can post a picture with my blog. Then I'll do that, but think, no I need some different pictures. And thus it has gone on...

So here I am, finally blogging. I guess March has gone and April is in full swing now. How did that happen? The weather so quickly changed too. It went from 45 degrees to 90 degrees all in about seven days!

Well, since I last wrote, Andy and I have moved into an apartment in Harrisonburg. It is an old victorian building and we occupy one of the upstairs apartments. It is quite lovely, except for the fact that it is on the edge of the ghetto. We even have a bullet hole in our front door. I'll have to post a picture of that later.

Now Harrisonburg is not a huge place, so the 'ghetto' isn't big, but we are on the edge of it. I am only slightly nervous to go out alone at night. And sometimes when our apartment is quiet we can hear the neighbor lady yelling at the man/person she lives with downstairs. They have fights about everything and each time she tries to kick him out, but he always come back. Why, I have no idea.

Just yesterday the maintenance guy came to fix the tiles in our shower and asked if we had any problems with the neighbors. I responded, 'oh the ones downstairs, they just like to fight a lot. We aren't so bothered by it though, unless it is 2am." At which he responded, "no, I was taking about the homeless guy next door." What?! Apparently the apartment behind us (all in the same building) has been occupied by a homeless man who kicked in the door to live there. We had heard noises in that apartment before, but thought nothing of it. Interesting...

Anyway, even if we live on the edge of the ghetto we are still happy to have our own place. We have been enjoying making it our own and getting along with its little quirks.

More about the inside of the apartment next time. 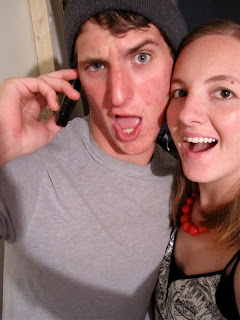