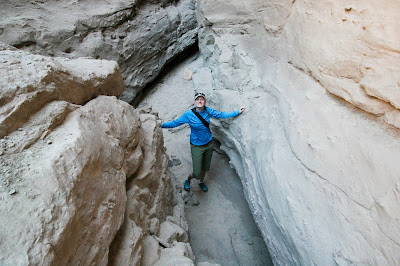 Last week I wrote about our trip to Palm Springs. I mentioned that we had gone slot canyon hiking and I am finally posting about it. 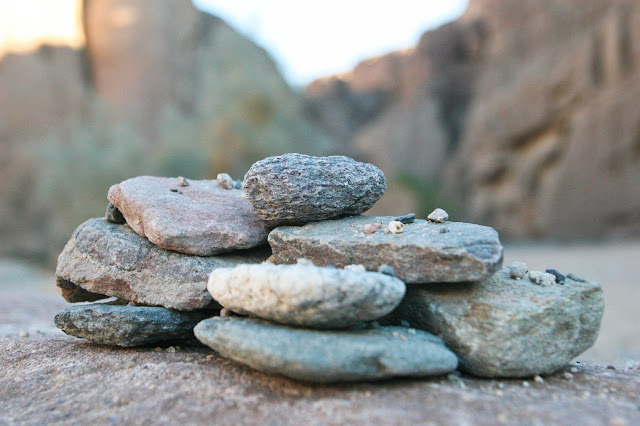 What an adventure we had! Before going to Palm Springs Andy mentioned that he wanted to do some slot canyon hiking. Once we got there, we acquired a lot of information on trails through the visitors center and hotel. After sifting through a lot of information we ended up settling on a trail that Andy picked. Andy had found a rough map along with some written directions for a trail into a slot canyon that we would be hiking. (I honestly don't know where he found the trail information, but I don't think it was from the visitors center or the hotel.) 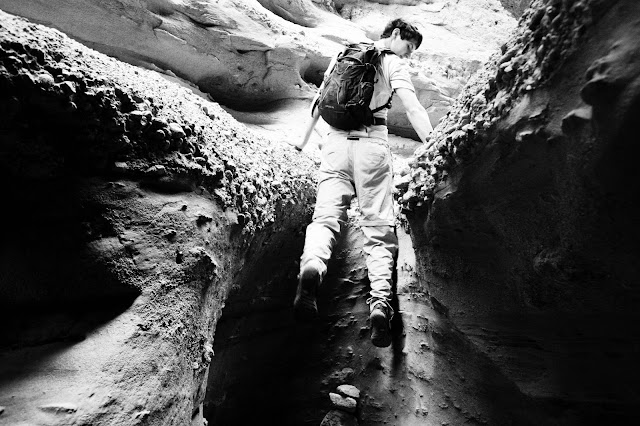 The next morning we woke up at the crack of dawn and left for our slot canyon hiking adventure. We found our way to a dirt road that said 4 wheel drive cars only...oops, we weren't driving a 4wd but took the road anyway. Luckily it wasn't too bad. At the end of the dirt road were huge rocks and boulders, that was where the hike was to begin...according to the random directions that Andy had. 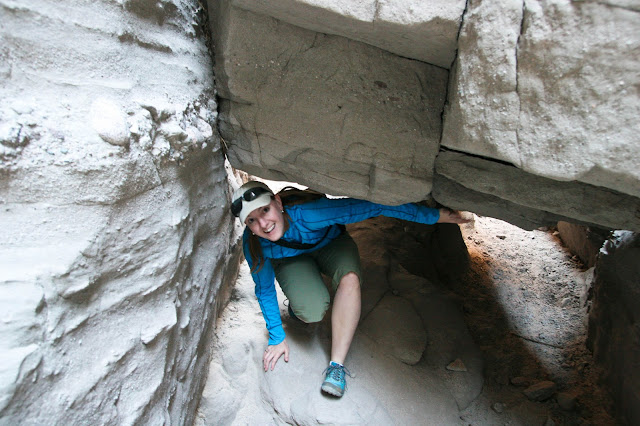 After glancing at the rough trail directions, Andy took us into the first rock entrance that he found. (Sure he was following directions...) We quickly found ourselves in a very tight slot canyon. In some places we were en-caved by the rocks and had to get on all fours to crawl along the trail. Other places we had to climb 20 feet of rock and disintegrating rope to get to the next part of the so-called trail. It was definitely an adventure, but all the while I kept thinking of the movie 127 Hours and how he was trapped in a slot canyon until he sawed off his own arm to get out. Yikes, maybe I was a little paranoid. 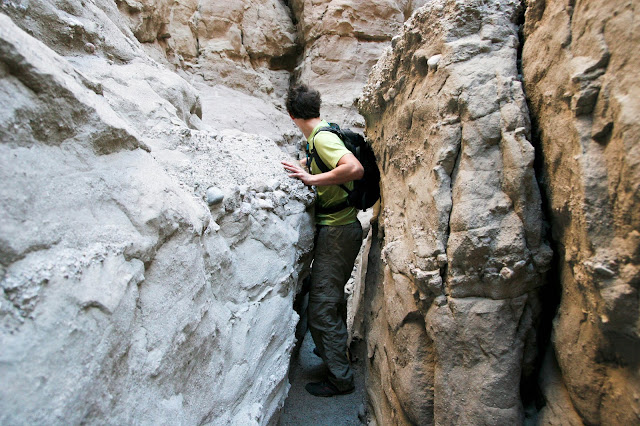 We climbed the last and longest rope up the rock to get out of the slot canyon and were in the middle of the desert. We chose a direction to go (based on Andy's version of the directions) and over an hour later we quickly realized that we were lost. Great, lost in the desert with only 1 water bottle for two people and a dog! Andy and I fought over the directions for a while before deciding to back-track to the slot canyons and find our way back via the way that we had come. Luckily, we were able to find the same slot canyon and retraced our steps back. I have to say, climbing down the 20 foot ropes was a LOT harder and scarier than climbing up them. I never want to do that again! 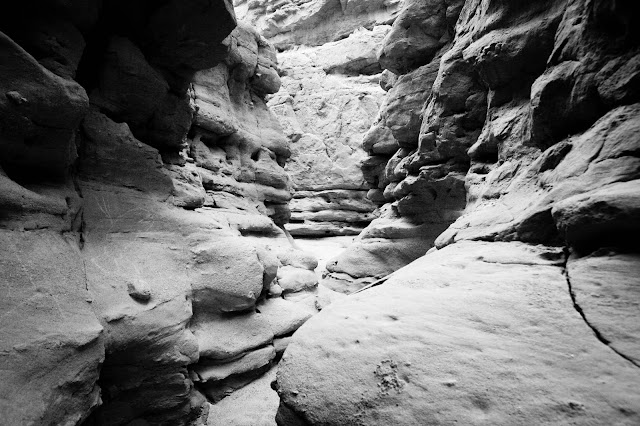 All in all, we got out safe and were not trapped for 127 hours, phew! It was a fun adventure, but next time we will be sure to pack more water and leave our dog at home. I would also prefer to take a legitimate trail, rather than one that someone half ass created and then put out there on the internet for Andy to find. 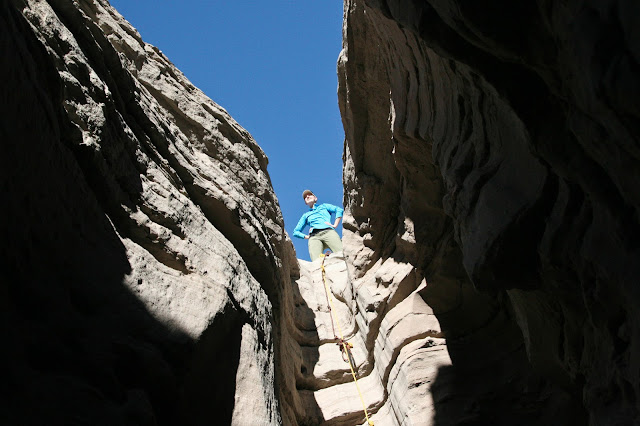 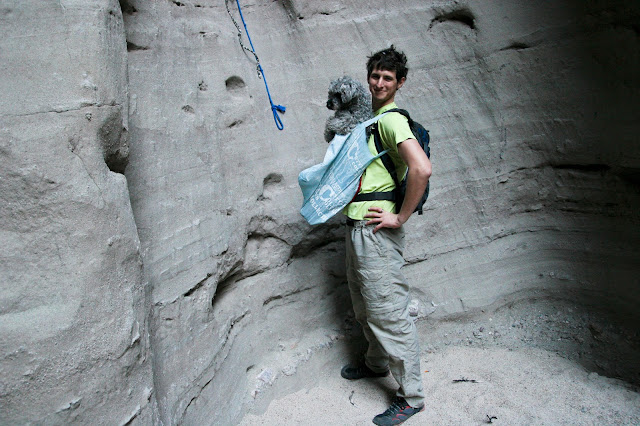 This was the way we transported our dog up (and down) the ropes and rocks. He was a trooper of a pup! 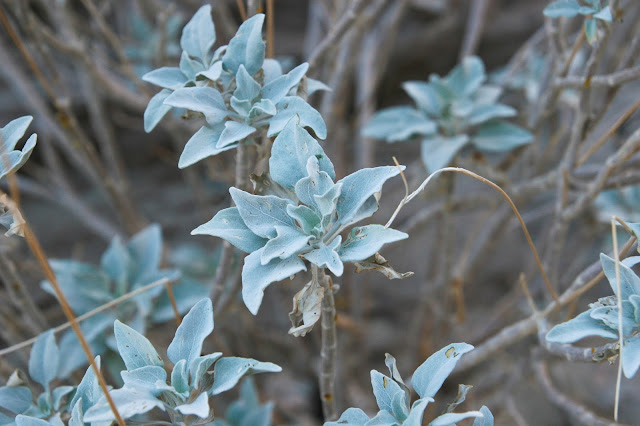 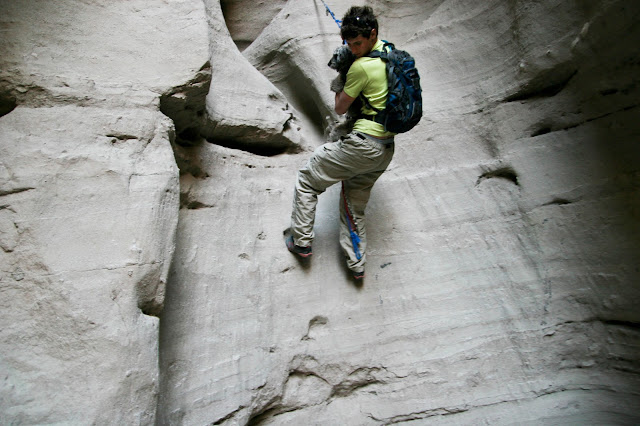 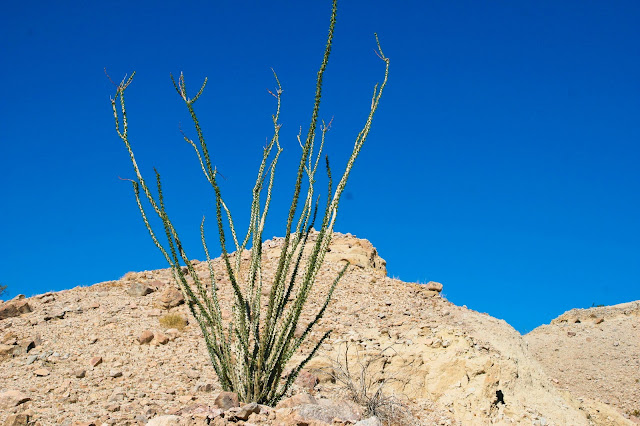 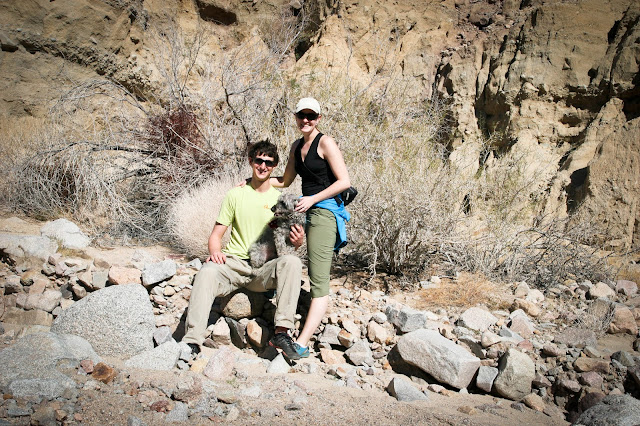 A self-timer family picture in the desert before we got lost and cranky.