My History with Anxiety 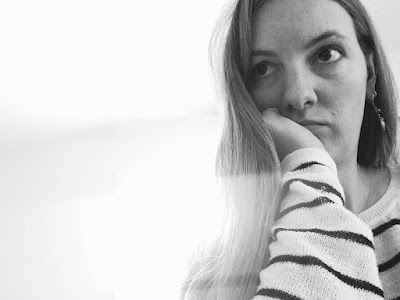 It seems like people are talking more and more about anxiety these days. I love it! It makes me so happy that issues kept quiet in the past are now common talk. I think it helps everyone to be able to openly discuss something like anxiety. I've said it before and I'll say it again, this blog has mostly become a place for me to process life and speak my truth. I am happy for other people to read it, and in doing so I hope that I can be helpful or even motivational.

So anxiety... I get a little anxious even just typing that out, ha! Anxiety can surface in a variety of ways. For me, it appears in jitters, stomach flips, vision loss, sometimes flushing of the skin, and last but not least, panic attacks. My anxiety didn't show up until my parents divorce when I was about 19 years old. Since then it has come and gone with the events that have happened in my life. Here is my story of anxiety thus far.

At 19 years old and a freshman in my second semester of college my parents decided to get a divorce. This divorce came out of NOWHERE! I had no idea my parents were having problems. My family was a solid missionary family, we were the model of the perfect Christian family. Seriously, I had often thought that my family was too perfect. Well, not so. I won't go into all the details, but long story short my parents got a divorce because my mom was gay and felt like she couldn't live the lie of a straight marriage anymore. Both of my brothers were upset so I felt like it was up to me to stay strong. I put on a happy face and pretended like everything was ok, but deep down everything was very very messed up. This is when the anxiety started.

I went to a small college in a small community where a lot of people knew me and my family. After the divorce I was afraid to look people in the face for fear that I would see pity in their eyes. I did NOT want to be pitied for the tragedy that my family had become. I also knew that people didn't approve of my mom's "gayness", so I also didn't want to see those looks of disapproval. (Though, I did see plenty of those looks.) Avoiding people that knew my family was impossible, so the anxiety began to creep in. Anytime I saw or spoke with someone that knew of my parents divorce I felt like my insides were rotting and on fire. My eyes would often blur or my vision just went black sometimes. It was an incredibly crippling feeling. So to get past it I just ignored as many people as I could. Or I drank, or smoked weed. Those helped for a short amount of time, but the relief was never long term.

The summer after my freshman year of college I moved to the beach. I had escaped! At first it felt really good. I didn't know anyone, the anxiety was gone, I felt like I could start over. As the summer went on though, I began to miss my family desperately. I felt like I had just abandoned them for my own sanity and it felt wrong. Then I had my first panic attack. I was driving and another car cut in front of me. It was nothing, no accident, not even close. But it set something off inside of me. I freaked out, then my vision began to go black, and all of a sudden my fists clenched. Luckily I was able to pull my car over and just barely got it into park before I lost all control of my body. From that point, my whole body seized up. It felt like every single muscle in my body was fully tensed. My fists were clenched so tight that my nails were digging into my skin. My chest was heavy and I couldn't breathe. I had to gasp for air. All the while my vision was blacked out and I couldn't see anything. I honestly thought I was dying. Everything inside of me felt like it was failing. Luckily a passing car stopped and called 911. An ambulance came and got me. They loaded me into the ambulance and calmed me down on the way to the hospital. Once my breathing was under control everything went back to normal in my body. I could see again and my fists unclenched. They told me I had a panic attack. After that, I moved back home for the rest of the summer.

Throughout that summer I had two more pretty sever panic attacks, both while I was driving. I began carrying a brown paper bag with me everywhere I went in case I needed to breathe into it to get my breath back to normal. It was a rough summer, especially as my parents finalized their divorce and put our house up for sale. I had anxiety for the rest of college, and a few more panic attacks. I figured out how to manage the panic attacks, but the anxiety never went away.

Since college I have worked SO HARD at managing my anxiety. It comes and goes. If there is a big event in my life it usually comes back pretty severely. When I got married, a wedding was out of the question for me. I knew it would bring on all sorts of anxiety, so Andy and I eloped. While I am sad that we never had a wedding, I do feel like I dodged a huge bullet and was able to escape a lot of anxiety and stress. Big family events still bring on a lot of anxiety, but at least I am not the center of attention, so the anxiety is manageable.

When I gave birth to Hazel I had an inkling that my anxiety may come back, and it sure did. After bringing Hazel home the anxiety settled in like a dark cloud. Not a depressing cloud, just an uptight anxious one. I was anxious about leaving the house, anxious about breastfeeding, anxious about visitors. Pretty much everything caused me severe anxiety, and I was so overwhelmed with having a newborn that I couldn't control the anxiety like I had in the past. When Andy had to go back to working out of town during the week, my anxiety would get so bad right before he left that I would vomit. It was embarrassing and I was so overwhelmed. I didn't even tell Andy at the time that I was anxious because I was embarrassed for feeling out of control of myself. While Andy was gone all week I would just hole up in the house with Hazel out of fear of leaving the house. If we needed something, too bad, I wasn't leaving.

I finally realized that my anxiety was taking over my life. I began setting small goals for myself to leave the house with Hazel. Slowly, little by little, I got out more. In the beginning it felt horrible and wrong, but I left the house anyway. Then I started to exercise and eat better. That's when I noticed a HUGE difference in my anxiety. I began feeling more confident, more healthy, and that helped with leaving the house. I didn't mind talking to strangers anymore, or doing multiple errands in one day. I still have anxiety, but I finally feel like it is under control again. I don't think my anxiety will ever completely go away, but I know how to control it for the most part. Now I also know that exercise helps with it, SO MUCH. I am happy to constantly be arming myself with little things to combat my anxiety.

Some things that I find are helpful when I am anxious:
-I have taken this before and helps calm me down in a very gradual way.
-I like to pop these (ha!) before a job interview. They really work with my stomach nerves!
-I've great things about Zenta, but I haven't tried it yet.
-I also like to put a penny or any other coin in my pocket and play with it as a distraction to whatever may be causing my anxiety.