Now that I am 8 months past giving birth I finally feel like the trauma is gone! Since giving birth, many of my friends have had babies and I can now confidently say that I think the whole process is beautiful and magical. Looking back at my newly postpartum blog posts, I surely did NOT think anything about having a baby was beautiful. I have finally come around though! 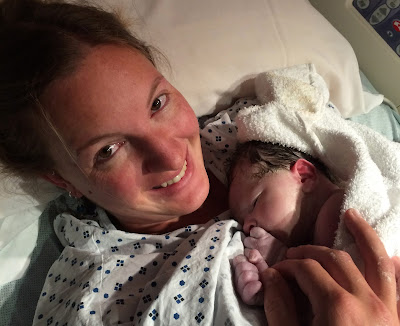 I want to record the birth story of Hazel before it slips my memory too much. I know big parts of it have already dissolved from my memory, and I'm sure Andy would dispute the way I tell the story, but this is my birth story and how I remember it. Be forewarned, I wrote out the long version. :)

I was diagnosed with melanoma just a few weeks before my due date. It was a mole that had spread and become discolored. Luckily we caught it early, so all they would have to do was a minor surgery to remove the mole and a large area around it. The surgeon did not want to perform the surgery until I had delivered my baby though. I passed this news on to my midwife and OB who then consulted a variety of other doctors about this issue. They concluded that it would be best to induce me so that I could have the baby before the melanoma spread or got any worse. I was induced the same day they made that decision. Andy and I had approximately 5 hours to prepare our house and ourselves to welcome a new baby. Eeek! 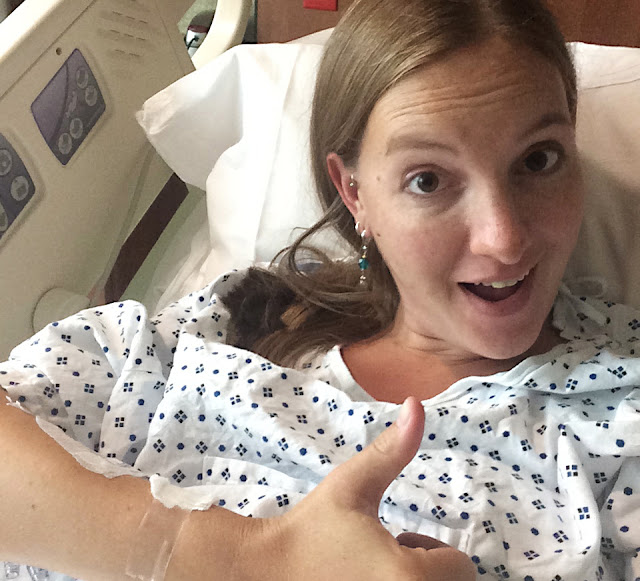 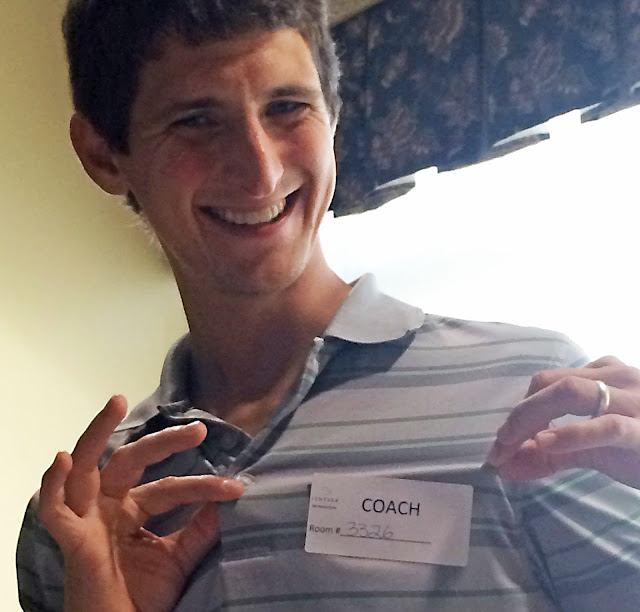 So it was two and half weeks before my due date that I was induced. I had an appointment early afternoon where my midwife swept my membranes. (Don't ask what that is, because I really don't know.) It was uncomfortable and I actually felt contractions start immediately. She said that might happen. Then I went home to clean the house before heading into the hospital for my actual induction. All afternoon I had light contractions while I cleaned like a crazy person.

At 5pm Andy and I checked into the hospital and I was given Cervadil. I had already been having contractions, but the Cervadil was supposed to ease me into labor even more. That night I slept a few hours through light contractions. I woke around 5am pumped full of adrenaline because I knew we were going to have a baby that day. Unfortunately, my contractions were still very light, so they left the Cervadil in for another 6 hours. Since my labor was light we decided to let a few visitors stop by. We joked about painful labor and had a pretty good time despite my contractions slowly getting stronger. Once all the visitors had left, Andy and I decided to walk laps. We walked and walked and walked around the labor unit! This helped and definitely brought on stronger contractions to the point where I would have to stop walking, grasp the railing on the wall, and moan my way through the contraction. It was quite dramatic! 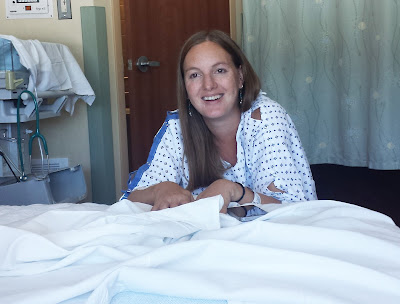 Around 4pm we went back to the laboring room because walking was too exhausting for me. At that point I bounced on a ball, rolled around the bed, moaned like a banshee, vomited, cried, rolled around the bed some more, and finally I got into the whirlpool. The whirlpool was pure bliss. I was able to relax, but unfortunately that just made my contractions come on even stronger. After an hour they forced me out of the whirlpool to check my progress. I was butt naked, dripping wet, shaking, crying, and moan-yelling. I was a complete mess!! When they checked me I was 6cm...only 6cm after 24 hours. This came as a huge disappointment to me, as I was in the most miserable pain I had ever been in. 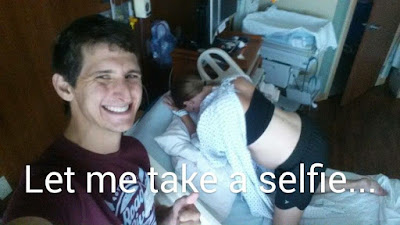 Andy thought this was funny and texted it to all of our friends...he didn't mention it until after I gave birth. (shame on him!)
Despite not wanting to get an epidural, I was at my wits end. On a pain scale of 1-10 I was a 12! I didn't know that kind of pain even existed. The pain was so bad that I was shaking uncontrollably and felt like I had zero control of myself. Through shaking and yell-moaning from pain I demanded an epidural. They said the anesthesiologist was with another patient and couldn't come for another 15-20 minutes. That was unacceptable to me. I told the nurse I would die if I had to wait that long, so she hooked me up to IV pain meds. The IV helped, though I just felt like I was high and in pain at the same time...definitely a strange experience.

Around 6pm the anesthesiologist came in and politely explained the procedure to me while I balled my eyes out and vomited again. I was in immense pain, but I was also scared of getting an epidural. After some more drama from me, I finally sat still and got the epidural. It was a piece of cake and I really didn't feel anything. Very quickly my body numbed, the pain went away, and a feeling of peace flooded my exhausted body. It was like night and day. I fell into a deep sleep. Around 8pm I was 8cm dilated so they broke my water...I didn't feel a thing. Though apparently I pooped myself, lovely. I slept for a few more hours and around 10:45pm I woke up to the midwife checking my progress and saying, "Ohh, you are having this baby right now!" 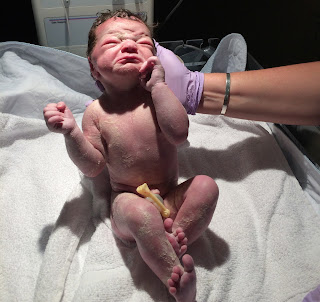 A flood of nurses came into the room, two giant spotlights were turned on, my feet were placed in stirrups, and we were having a baby! I was not prepared at all. In fact I asked if it absolutely had to happen at that moment, ha. I had been sleeping and was out of it. I felt like I needed a good hour to process what was about to happen, but no such luck, they could already see the head! Everything was very frantic. Andy held my one leg, a nurse held the other, and the midwife was at the base of the bed. My body was still very numb, but I could feel a strange painful pressure in my lower abdomen. They had me hooked up to the monitor to see when my contractions were coming, and it felt like I had a contraction every 30 seconds, no lie. I pushed hard and strong and intensely while everyone yelled at me for a good 15 minutes. (Seriously, it felt like chaos.) Right before the last push I vomited one last time, just for good measure...and then, Hazel was born! Just like that. 11:07pm, 30 hours after my labor had started. 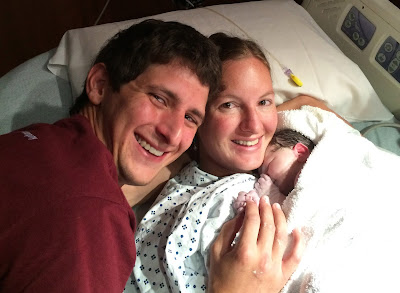 They put Hazel on my chest, but she wasn't crying so they gave her a good shake and sure enough she started wailing. Andy jumped into bed with me and we all had a good cry....and now I can see the beauty and magic in birth. The end. (Or rather beginning.) :) 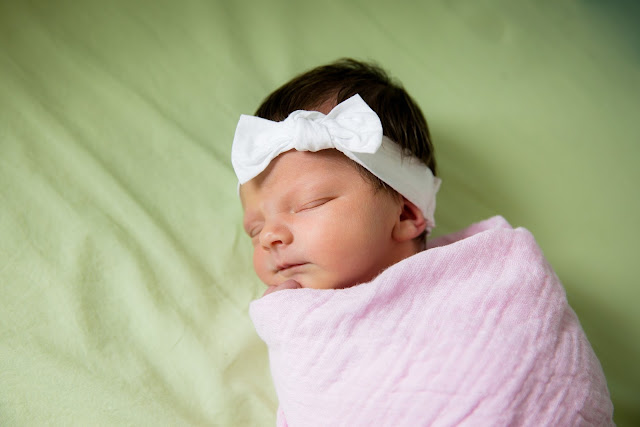