Things I didn't expect in pregnancy

Since I am almost half way through my pregnancy I decided it would be a good time to post about the things that I had not expected to happen, but have. Everyone talks about the glowing pregnant woman, or how your hair thickens and shines, or even the bad things like morning sickness and back pain. I was blissfully ignorant as to the real things that actually happen during pregnancy. I know that everyone is different, so these are just the things have I personally have gone through. 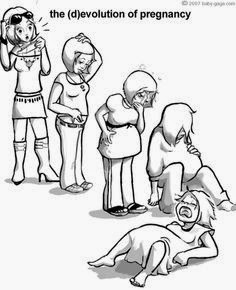 Greasy Hair
About a month into my pregnancy my hair became so greasy that I felt like I either had to wear it up, or wash it twice a day. I have NEVER had hair that greasy before! Luckily the grease stopped at about 12 weeks and now I am back to having normal hair. I still don't have the super shiny thick hair that people talk about pregnant women getting though.

Weight Loss
During my first trimester I lost 10 pounds. Just when I thought I would be packing on the weight, I was losing it instead. The midwife said that is completely normal. I had no idea! She said it could be from a change in lifestyle (like cutting out alcohol) or from morning sickness (I was puking up a solid meal about three times a week). Most likely it was a combination of those two things.

Hip Aches
Since the day I found out I was pregnant my hips have ached. I expected some hip and/or back pain towards the end of pregnancy, but never at the beginning. I have had hip aches all through pregnancy so far. It seems to be lessening (now at week 18), but maybe it will be back in my third trimester.

Belly Rot
Before, during, and after I had morning sickness I experienced something that I call "belly rot". It felt like there was something rotting in my stomach. I don't know how else to describe it, except for the fact that my stomach just felt rotten and nothing could fix it.

Sharp Abdominal Pain (round ligament pain)
I have had this since the beginning of pregnancy as well. The first time it happened I sneezed and felt a horrible sharp pain in my lower abdominal/uterus area. The pain lasted for a whole 5 seconds and I thought maybe I was miscarrying. It happened again two days later. Then I developed bronchitis and the pain happened almost every time I coughed. It was horrible! The midwife explained to me that it was round ligament pain. She said the round ligaments that hold my uterus in place loosen during pregnancy. This allows my uterus to expand and grow, thus causing round ligament pain with coughing and/or sneezing.

Loss of Appetite
Before pregnancy, everything I heard about appetite was that it would be insatiable. That I would be ravenous and want to eat everything in sight! This could not be farther from the truth. I have not had a single bit of appetite since getting pregnant. When the morning sickness hit I was definitely not hungry, but even now that morning sickness is gone I still don't have an appetite. I try to eat consistently, but I am never actually hungry. It is a weird feeling, especially since my pre-pregnancy appetite was always great.

Super Human Sense of Smell
It is true, my super power is smell! I have heard that pregnant women have a good sense of smell, but I had no idea it would be this wild. No joke, I can smell people a whole block away. I smelled a neighbors perfume as she got into her car three houses down from ours. I can smell what people are cooking for dinner as I walk my dog around the block. I can even smell when Andy has gas in another room of our house. I tell you, my sense of smell is crazy!

Major Dry Skin
Yes it is winter, yes dry skin happens, but whoa I am so dry! I have whole patches of red dry skin all over my arms and legs. When I get out of the shower I put solid gobs of lotion on these spots and just wait for them to soak in. Still, I am dry.