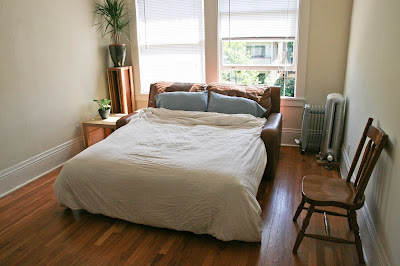 Andy and I have a two bedroom apartment so we decided to host Airbnb'ers. Despite enjoying the extra room in our apartment, we decided that we would rather host people. Our couch pulls out into quite the nice queen sized bed, so after some rearranging and finger smashing moving of the couch through a narrow doorway, we had a guest bedroom! I took lots of pictures, wrote up a nice piece about our neighborhood and close proximity to public transportation, and posted it on Airbnb. Within 2 hours of posting our "guest bedroom" a few people already wanted to come stay with us. It was exciting, like Christmas. I could look at people's profiles and see how legit they seemed, we could write back and forth on the website, and when it was all said and done they could book our room after I approved them. What fun!

That first day that I posted our spare room on Airbnb about 4 different groups of two people booked with us. Our first guests didn't arrive until about a week after that. Leading up to our first guests arrival I busied myself cleaning, washing sheets and towels, and clearing space in our refrigerator for them to keep some groceries. I was excited and nervous. These were people that I had never met, who I would be welcoming into our home along with giving them all the keys to our apartment. (Our landlord would probably flip his lid if he ever found out!)

The day our first guests arrived I was awkward talking all fast and showing them random things like where I keep my vitamins in case they wanted any. The couple visiting was from Los Angeles (though she was originally from Europe) and were visiting the Bay Area since she had never been before. They also brought their dog (which I allow for an extra fee) who was a husky mix sweetheart. The LA couple stayed for 3 days and were out for most of the day and evening. When they were at the apartment they stayed in their room and were quiet. Overall it was a really nice experience. Their dog got along great with our dog, everyone was happy, and we made some money towards our rent at the end of the day. When they left they said their next stop was to a vineyard south of the Bay Area. Then a few days later we received a mysterious bottle of wine in the mail. We can only guess that it was from them. What a wonderful kind gesture!

Since that first couple from LA stayed with us we have had 3 more groups of people. Each have their own quirks and personalities. I'll try to write some stories about the more interesting people that stay with us. So far it has been both interesting and successful and I'm hoping it stays that way.