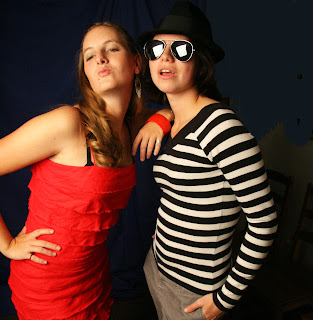 At a photography party in 2006

The title of this post cracks me up! Mainly because the lesbian part is NOT true. I think people have wished it to be true, but that is only wishful thinking on their part.

I should start at the beginning. Freshman year of college I met my best friend, Heather. I did not know that she would be my best friend because she annoyed me when we first met. I thought she was a squirrely girl who had nothing to contribute to my college experience. (How little I knew!) We did live on the same hall though, so we ended up doing some of the same things.

One cold, wet, dreary Friday night I decided that I absolutely had to get away for the weekend. I offered up my car to a group of girls and said, 'ok, where can we go that is warmer than here, but not expensive?'. Heather chimed in that her grandparents lived in South Carolina, and at the beach none the less. How perfect! So we quickly loaded the car, made calls to her grandparents on the road, and headed south for the weekend. That was the beginning of our friendship that quickly turned into a best-friendship. (Yeah, I just made up that word.)

Throughout the rest of college Heather and I did a lot together. We did a service trip in Mexico, went on the same study-abroad semester, we lived in on-campus and off-campus housing, we traveled to Europe one summer, held the same job at a coffee shop, did a semester in Washington DC, and we even had the same major. The only things that really separated us were our minors and our boyfriends.

We were inseparable. Heather was so easy to hang out with, we did everything together. In fact, most of the time we hung out with each other more than our boyfriends. (Though, I must say, our boyfriends were never that into us and they weren't the best relationships we'd had. So we had good reason to chose each other over our boyfriends.)

It was because of all the time we spent together that I have 'lesbian lovers' in the title of this post. Heather and I spent so much time together that people began to think we were lovers. (Andy even asked me about it before we got married. Ridiculous!) Heather and I both like to laugh at that because it is such a silly thought! We were two very boy-crazy girls. No matter though, people thought what they wanted to think, and despite it all we decided to teach English together in Korea after graduating from college. Obviously that spurred more lesbian talk, but we were on our way to another country so it didn't matter to us.

Living together in South Korea was a crazy whirlwind of a time. Heather and I learned a lot about ourselves, about being in another culture and being vulnerable. We were each others support, but we also grew apart and found other friends. It was an intense time living in another country with my best friend. I don't know if just any friendship could survive that...or if ours even did at the time.

At the end of our contract in South Korea Heather and I decided to go our separate ways. We had been inseparable since the middle of our freshman year of college, so it was a difficult thing to do. In many ways it felt like our friendship was ending. We didn't write or speak for a few months while we each adjusted to life on our own without a best friend.

I ended up traveling with Andy and getting married, while Heather went back to South Korea to continue teaching English. That was 4 years ago. Luckily in those 4 years we have each grown in our own lives and discovered that we still need each other as friends. A friendship that strong and deep cannot just be forgotten. Now, I am happy to say that Heather and her long-term boyfriend will be moving to California later this year! California is a large state, so unfortunately they won't be nearby. Just knowing that we will be in the same state again after 4 years though, is comforting.

I never expected to have a best friend like Heather. It all happened without us realizing it, and I am glad that it did. There is something special in knowing that there is someone out there who will always be on your side and understand you, no matter what happens. Our friendship has survived a lot, especially though crucial growing and learning times. I am excited to finally be living in the same state as Heather again, and see our friendship through the next season of our lives.