Today I am having a very bad, no good day. I am so frustrated by being sick. I have been sick for a week now, and because of my sickness I am holding both Andy and myself down from doing fun things around Taiwan. I think Andy shares in my frustration.

So today we set out to make me better.

First, Andy rigged up a steamer for me at the end of the bed. He had me lean over the end of the bed and hang my head over a bucket of hot, steaming water. The bucket looked familiar...it was our food garbage bucket. We were starting a compost in that bucket and Andy decided it would serve as a good steamer for my head. He thought the old vegetable smell might be good for me, what a wonderful husband. Then he tied one of this t-shirts over my head and then over the bucket. I told him a towel would be just fine, but he insisted on rigging something up. The steam helped my lungs but I was still coughing and miserable.

The second thing we tried was orange juice and lots of meds from the doctor. The meds helped a little bit, but mostly made me nauseous. Nausea on top of all my other problems made me completely miserable. Poor Andy for putting up with me. 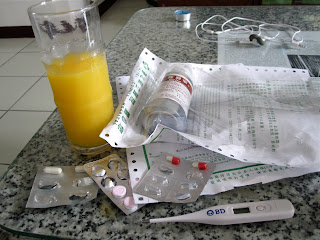 The third thing we tried was meditation. This was done at my request, I think Andy just wanted to take a nap. I put on some meditation music of chimes and rain and let my body relax. After 30 minutes of meditation, I felt wonderfully better and Andy was happy to have gotten a little nap. My mood was improved, my coughing was at a minimum, and my fever was down. Could meditation have really worked?

Andy decided we needed to try a fourth thing, just in case. So he set out to cook up a lot of garlic for me to eat. He chopped a wok full of garlic and onions and then had me stand inside our closet of a kitchen inhaling the steamy onion and garlic concoction. It wasn't so bad actually. Then Andy added tomatoes, thyme, and snow peas, and called it a 'sexy dish'. What a man! :) 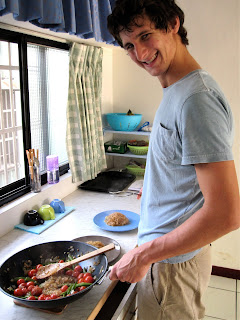 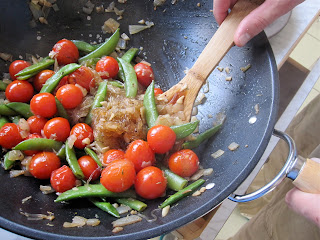 Then to top it off, Andy made me ricola tea out of ricola cough drops. It was delicious!

I am feeling much better after my day of cures with Andy. Have I mentioned how wonderful Andy is? I am a lucky woman to have such a good guy taking care of me.