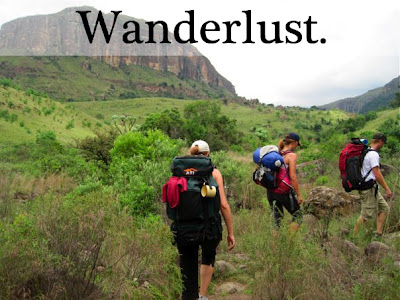 Backpacking in South Africa with Andy and friends a few years ago.

I was really hoping to write about making new friends or good looking older men (like Anderson Cooper!), but wanderlust kept popping into my head. I can never seem to get away from wanderlust. It follows me like the plague! I blame it on my parents raising me in another country and constantly traveling. Don't get me wrong, I loved my childhood, but it has definitely shaped the person I have become today.

After graduating college I moved to LA hoping that would satisfy my lust for living in a new place. After 6 months I was not satisfied, so I moved back to Virginia. Then I got the crazy idea of teaching English in Korea. So I did that for a year and a half, and boy oh boy was my wanderlust being satisfied. Every day was new and different. I was challenged by the language, the culture, the people. I was able to travel to other countries like Vietnam and Thailand. It was magical to say the least. (But of course frustrating at times as well. Living in another country is not all fun and games.)

Going from South Korea to living in Virginia and Washington DC was an interesting transition. (More on that another day.) Andy and I were living in DC though, which was a semi new city, so there was some exploring to do. After a while it became bland, just like LA, just like Virginia. The wanderlust started again and it took over me like a disease, consuming my every thought. Starting a chocolate business in Virginia helped, but I never quite squashed the wanderlust.

Then, Andy got this job offer in the Bay Area. Yes, California! We jumped on the opportunity, excited for a new place and new adventure. Because you see, just like me, Andy also has wanderlust. So here we are, a new adventure every weekend. The Bay Area is completely new and I think we could find an adventure every weekend for at least a whole year. Somehow though, the wanderlust is creeping back into my life. Where is it coming from, why do I feel the need to leave after only just arriving here a month ago? Could it be homesickness for Virginia? It doesn't feel like it, but maybe I am not recognizing it properly.

So here I am, plagued by wanderlust. Constantly wanting, needing more travel, more adventure. I have yet to find a place I want to settle. Maybe it will never happen. Maybe we will bounce around from place to place forever. At this point, that sounds quite lovely actually.

Anyone else out there plagued by wanderlust?? Please tell me I am not the only one.