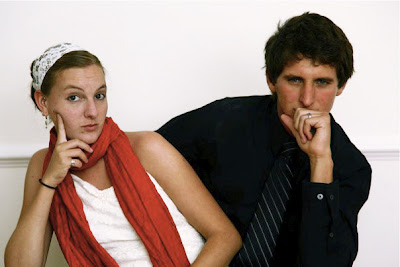 Andy and I have been married for 3 1/2 years, so we are not just coming out of our first year. This post was spurred by an article I read in Cosmo. First off though, I would like to note that I don't buy Cosmo. I did when I was 19, but those days are long gone. Our apartment building does however, have a 'free' section in the lobby where people put stuff they don't want. So I yoinked the free cosmo magazine.

While flipping through cosmo I found an article written about the first year of marriage and what things happen that you don't expect. Surprisingly they all rang true for me! (Now that is a first Cosmo!) So here is my list of 'First Year of Marriage Confessions':

Thoughts of Divorce
Yep, I said it. During our first year of marriage all I could think was that I had made a mistake and the only way out was divorce. In fact, I have threatened divorce probably more times than I can count on my two hands. Every time we fought or disagreed about something I would think about how happy my life was as a single person, then I would think that if I could just divorce Andy I could get back to that single life. I also tried to convince him that it was Me holding him back in life and that he would be better off without me. I truly believed that at the time! Now divorce is a funny joke to us because I brought it up so much in that first year. Thankfully I got over the "divorce" idea, but it probably took me two years.

Weight Gain
So much for the freshman-15...I'd say the marriage-10 is more relevant. During our first year of marriage I gained about 10 pounds and I swear my hips got wider from all that consistent sex! When Andy and I cooked together he would cook me the same size portion of food that he would eat. I remember him cooking and serving me one meal in particular that was literally a heaping mound of food on my plate. I thought, how on earth am I going to eat that! I would always tell him to serve me smaller portions and he would always forget. I never ate it all, but it was still more than I was used to eating. We also ate a lot more food in general because cooking together was so much fun. Thus the weight gain.

Longing for a Baby
During the first 6 months of marriage I wanted a baby SO badly! It was such a strong desire, I felt I needed a baby. Andy and I were so enamored with each other (when we weren't fighting) that we wanted our love to blossom and produce babies. It was like something strange had taken over my body and I just had to make a baby. Hormones! We even went off birth control, trying but not trying. We figured if we produced a love child all would be well. Luckily we got over that phase and quickly went back onto birth control. I don't think becoming pregnant with a baby immediately after getting married would have been good for us, but boy did those marriage hormones have an affect!

I didn't take his Name
In this modern day and age it is becoming more normal for a lady to keep her last name after marriage. To be honest though, I could never picture myself with any name but my last name. Keeping my name was a no-brainer to me and luckily Andy didn't really care. Looking back I am still happy that I have my own last name. To me it represents my independence. Yes, we are married but I am still my own person. The only tricky part will be when we have kids and deciding which last name they will get.

Thoughts of Ex-Boyfriends
During our first year of marriage I thought of ex-boyfriends a lot! Not only did I think of them, but I dreamt of them non stop. It was almost a problem. Obviously it was not something I could talk to Andy about either, so I just let it happen and hoped it would go away. The thoughts and dreams were probably 50% sexual and 50% just going over the relationship that I had with that person. It was weird and I constantly felt guilty about it. Luckily, the thoughts and dreams stopped about the time we had been married for one year.

Those are the main things that stand out about our first year of marriage. I am SO glad that we have gotten through that year and are now working towards year number 4. Going Strong!

What have YOU experienced in your first year of marriage that you didn't expect?